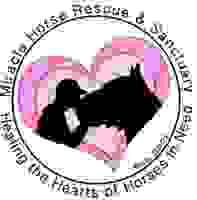 Helping Heal The Hearts of Horses In Need

Missy was rescued October 2006 in foal at a kill sale.  She was in foal and gave birth at the age of 28 to a beautiful colt who was named Spirit.  She passed away at the age of 33 just three days before her 34th birthday.  Being bred year after year throughout her life until she was rescued had taken its toll on her body. She was a kind and very gentle mare... Spirit was her last baby.

Lily was born to rescued mare Bradylynn.  Bradylynn was in Kansas and headed to the kill sale.  She came to MHR&S February 13,2013.  She gave birth to Lily May 14,  2013.  What a beautiful baby she was, she was a gaited mule as her mother is a TN Walker.  Lily had a tragic accident when she was 3 years old which prevented her from using her front legs, she could no longer stand.  It was so hard to say goodbye to her, I still see her when I stand at the kitchen and look at her pasture.  I see her thundering across the pasture chasing her herd mates. Now she thunders across the heavens, deeply missed by many.

Faith is a Shire that was rescued from a former PMU (pregnant mare urine) Ranch in North Dakota near the Canadian border.  Faith was in foal once again, as she stood in stocks, deprived of food and water.  She stood connected to equipment that collected her urine in order to sell to the pharmaceutical industry to make HRT for women going through hormone therapy.  Does Premarin ring a bell.  She was loaded at night, and in the early morning hours our transporter said he was shocked when he looked at her closer.  Upon his arrival to MHR he stated had he really known of her condition he would not have loaded her.  We were shocked, she was shaggy but you could see her bonea and she was in foal.  This was late February 2009.  Our veterinarian was out immediately and she was examined from nose to tail.  A feeding regimen was established and the next few months we watched her flourish physically and I personally had established an awesome bond with her.  She gave birth to Justice, she was healthy as was he.  She had Justice by her side for six months until he was weaned.  It was beautiful for her as this never happened before.  She was a content mare.  Three weeks after Justice was weaned we were out doing our morning feeding.  There was Faith lying like a puppy with nose balanced on the ground.  Normally when we approached her head would pop up knowing it was time to eat.  This time it didn’t happen, Faith never awoke from her peaceful slumber.  She had endured so so much before MHR and we were her do over.  We know that for the short time she was with us she received everything plus more love than be imagined. I truly miss this girl, and as I’ve wrote this my tears for her are on the surface.  Amazing horse!

Justice was absolutely magnificent, that is the only word that comes to mind.  He was born at MHR in June of 2009 to rescued mare Faith. He was only hours old and he squirted out of corral and decided a walk about was in order.  Faith was frantic and there I was wrestling a 125 lb baby to get him back to his mom.  Thank goodness for the live feed we had because people were calling Robert to get home.

On a beautiful 2018 fall afternoon we watched as Justice romped with his herd.  As he did everyday he went to his favorite spot for his daily nap.  He usually spent thirty minutes and at the forty-five minute mark I went to check on him and he was gone.  Justice had passed in his sleep as his mother did eight and a half years earlier.  He thunders the heavens with all who have gone before him.  He is so missed, such a gentle giant.

Your support and contributions will enable us to meet our goals and improve conditions. Your generous donation will fund our mission.